We've had a couple of new coffee shops open in town, over on the east second ring in a gigantic new shopping centre called Wan Xiang Cheng. (For readers familiar with the great West Edmonton Mall, Wan Xiang Cheng is about the size of two phases.)

Pacific Coffee hails from Hong Kong. They open unusually early, at 8 am, so I went in and asked for a chocolate croissant and a cappuccino, no foam please （no foam=不要奶泡). Should be a decent way to start the day, but there was little coffee flavour in the drink and the croissant was made with an unusual flavoured butter alternative. 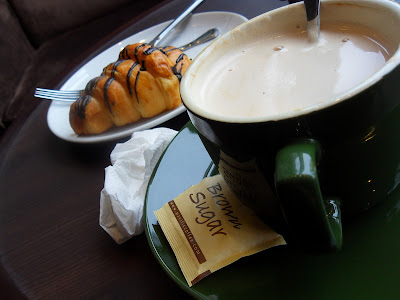 Costa Coffee, right next door, is an import from England. I wanted to try the same order of cappuccino with no foam, but the server said cappuccinos were 30% foam and it wasn't worth it, so I just asked for an espresso. It was barely a tablespoon and I couldn't catch any coffee aroma without practically putting my nose in the cup.

The very cute sweets, 11 yuan each, according to the server are made in Shanghai and flown in, but I would have been happier with a sugar cookie. The filling was strange textured and the macaron on top was crumbly rather than crisp. 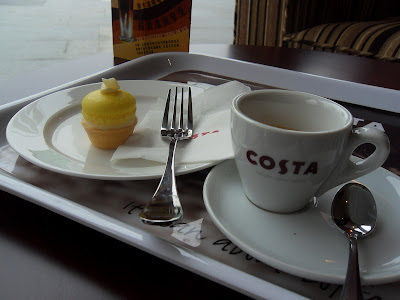 Both Pacific and Costa are carefully priced to compete with the green siren, but based on their coffee there is not much reason to make a switch, unfortunately.

Judging from all the bakeries opening up lately, mostly proliferating chains, Chengdu is developing a wicked collective sweet tooth. It's tough to pick out standouts, but one very popular bakery is called 85 degrees. I was reading the online reviews and found that people were loving the 'sea salt green tea' (海岩奶绿). They also have sea salt coffee (海岩咖啡). I tried both drinks, which are the usual sweet green tea and coffee mix, but with a layer of very salty creamy substance floating on top. It's the first time I've come across this flavour profile in a drink. The coffee is ten yuan, the tea is eight. 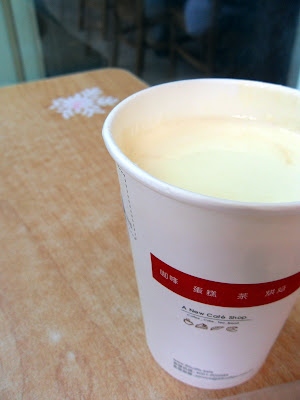 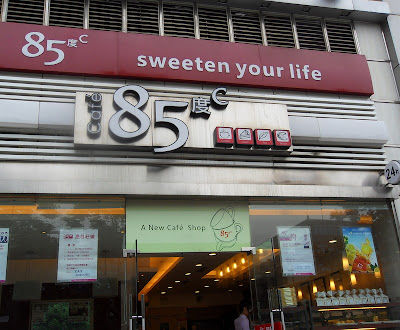