Office and government cafeterias that are open to the public are sought-after places for sustenance. Although they may have limited hours these places are fast, inexpensive, and many feel the food safety standards are higher than on the street. Recently some very cool friends brought me to the Jinjiang district police canteen for lunch.

The inside is strictly cafeteria style, but it was clean. 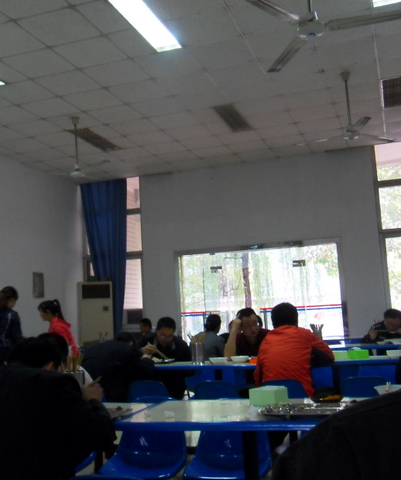 Most of the police officers were getting food trays to fill up from the dishes on offer that day, but we chose to order off of the menu. Cops have priority: 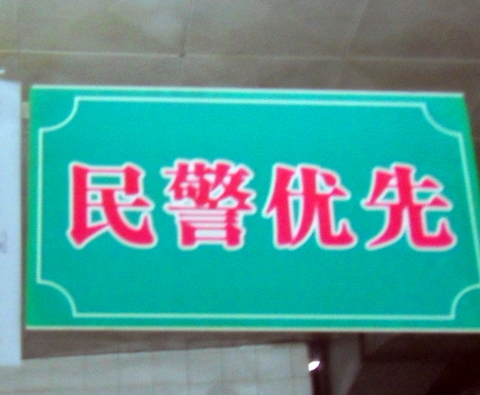 I asked the server about the beef shreds (牛肉丝) on the menu and she said we could get them done with celery or green peppers (our choice). 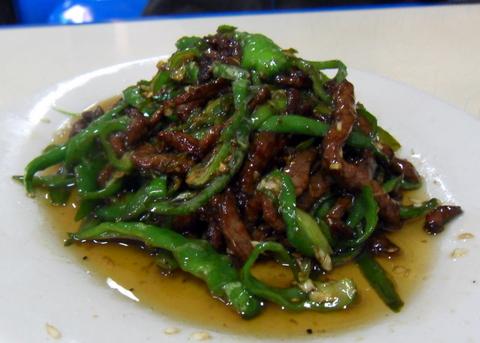 This was a pretty unique tasting bear paw tofu (熊掌豆腐). It tasted a little sweet, similar to yuxiang. However, it was fried to a nice crispiness under the sauce and we loved it. 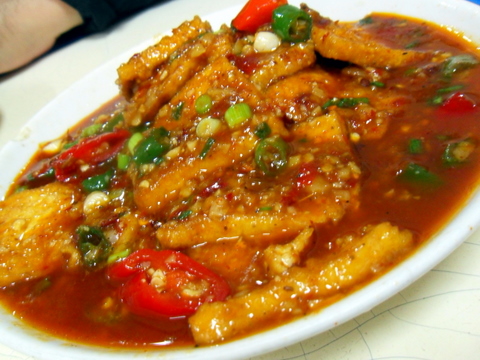 By the time twelve thirty rolled around, most of the staff were cleaning up.
Posted by Pepper at 7:11 AM No comments: Links to this post

There is a quasi-chain of noodle shops in Chengdu called Niu Wang Miao noodles. By that I mean there are several noodle shops with the same name but their menus, prices, and products are very different though many of them have the same sign and it's hard to tell which branches are actually related and which are not. If there were ever an original noodle shop around the Niu Wang Miao area (southeast of downtown) it's a mystery to me.

This bowl of strange flavour noodles is from the branch one on Xing Rong street. 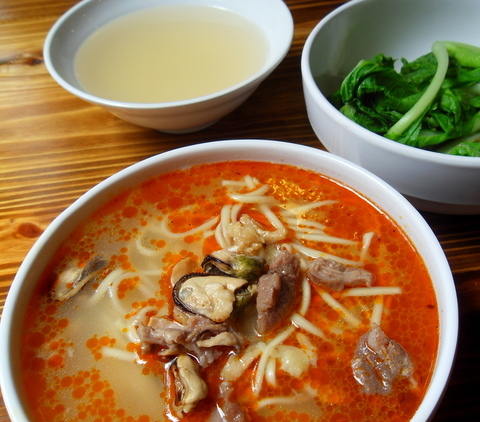 These were too watery for my taste. I like a good slick of the red oil on top.

Address in Chinese: 兴容街 #63
Posted by Pepper at 6:10 AM No comments: Links to this post

The House of Red Oil

The baskets of ingredients simmered away in the spicy soup: 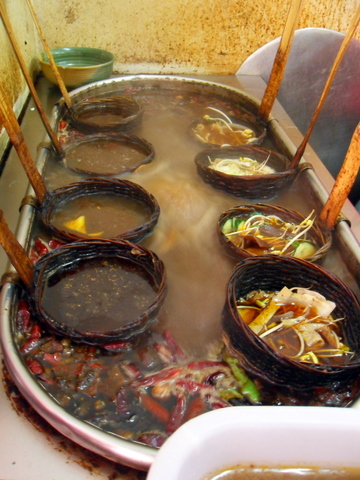 My vegetable version was pretty spicy. I got a bottle of peanut milk (豆奶) on ths side to tame the heat. 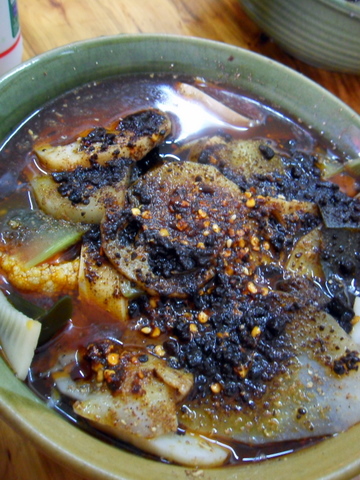 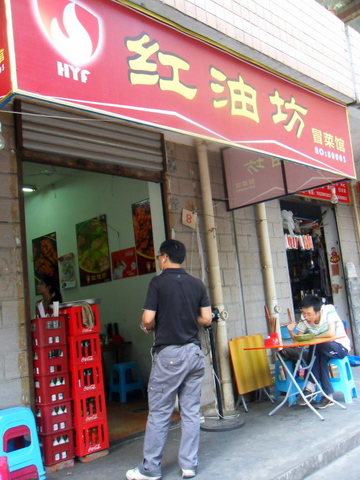 Address: 二环路东三段三号新居, on a small street north of the second ring across from Cheng Hua Ito Yokado
Posted by Pepper at 12:08 AM 2 comments: Links to this post

Among the last things I ate on a recent trip back to the home country were sashimi and a cocktail at Guu. Guu is a very popular Vancouver based family of Japanese izakaya - the kind of restaurant that does small plates to go with drinks.

When I got back to Chengdu and glanced at the business card I'd picked up from Guu, I was fairly stunned to see that Guu has a China location within walking distance from my home in Chengdu, of all places.

I noticed on the card that Guu shares an address and an expensive phone number (nearly all 8s) with Ginkgo Jingge. Ginkgo is a family of restaurants in Chengdu with each branch having its own specialty.  Ginkgo Jingge, near the Rainbow bridge, is best known for dim sum. On arriving, I couldn't find any sign of Guu though the staff assured me I was at the right place and handed me a dim sum menu. A server eventually led me to another section of the restaurant, with very few people, and came up with a menu card which featured some dishes from Guu. When I asked for drinks they only offered me fruit juice.

There were no staff behind the bar and the atmosphere was extremely quiet. The server eventually found an English speaking staff member who explained they do have some dishes from Guu, and the Japanese chef from there visits every few months. However, they do not offer cocktails at the Guu in Ginkgo. Also, the energetic staff greetings and informal buzz of a place like Guu in Vancouver is nothing like the atmosphere in a large, stately, restaurant like Ginkgo. Once we got over expecting a local Guu, we tried a few of the dishes. 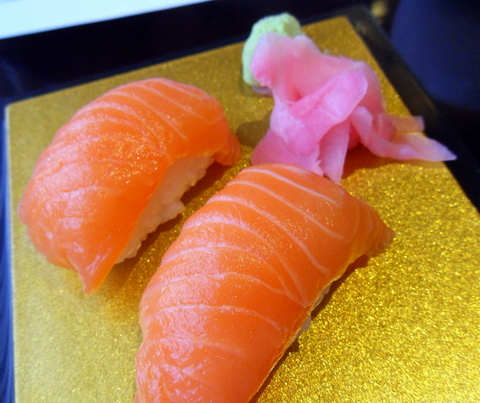 This seared fish salad was beautiful, but the dressing was really lacking something. 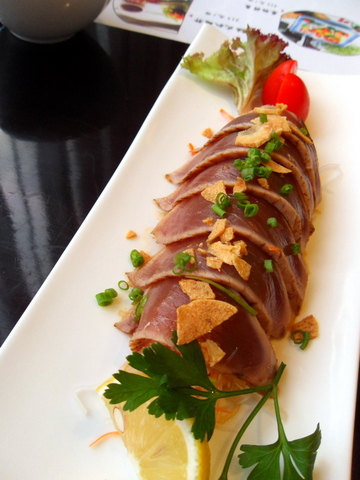 This beef salad was the only real hit among the dishes we ordered. We both loved the dressing. 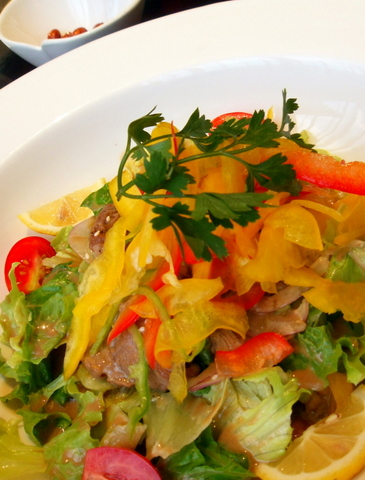 This boneless stuffed and grilled chicken wing was tasty and we liked that they provided some vegetation on the side, but the dish came off feeling a bit overdone to us. I mean, it's a chicken wing and I was supposed to be in a bar. 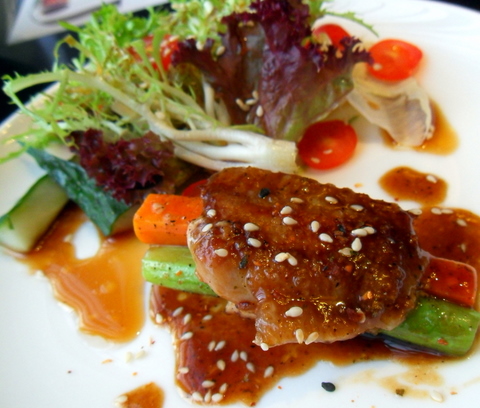 Since this branch of Ginkgo is best known for its dim sum, which would cost about half the amount we paid per person, we'll ask for the dim sum menu on our next visit.

A couple of weeks later we got to try the dim sum at Ginkgo Chuntian, the newest member of the Ginkgo family at the Guanghua Village branch of Renhe Chuntian department store.

The first thing to land on the table were small bowls of pickles and spicy shredded chicken. They were fantastic, but the chicken was far too assertive of an introduction to delicate Cantonese food. 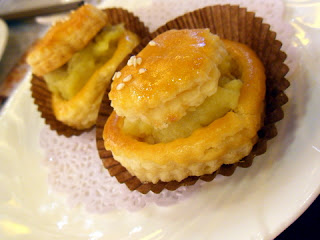 Fish slice congee. Congee is a must order if we go for dim sum and theirs is great. 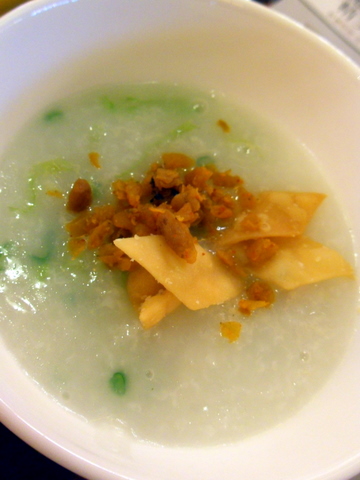 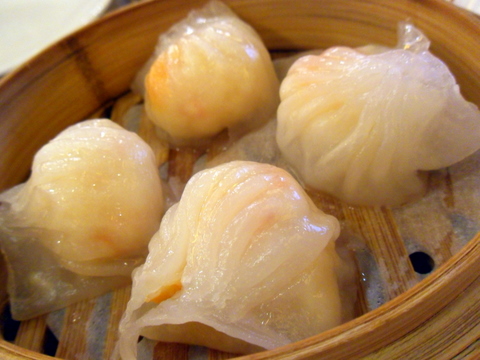 Turnip cake, a little soft to my taste, but a decent rendition. 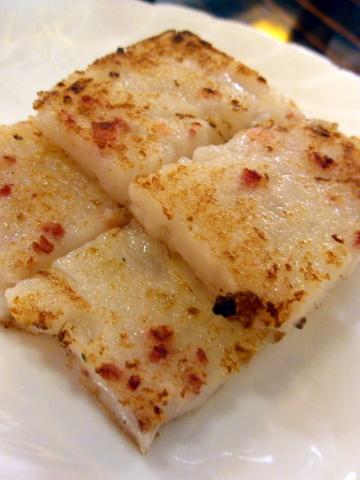 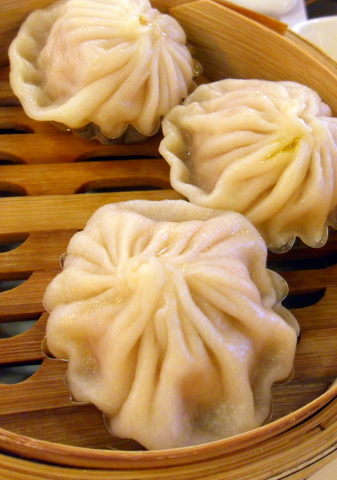 We didn't get to try a lot of the dishes we wanted to, but will be back.

Ginkgo Jingge is absolutely beautiful inside and is a restaurant to impress with.  Their servers are very polished but lack the warm, enthusiastic hospitality that characterizes very good Sichuan style service. Ginkgo Chuntian has the buzz you would expect from a new restaurant, and the servers were obviously not as experienced, but had the local 'reqing' and we felt better taken care of.  They were also enforcing the no smoking policy, while at Jingge customers were puffing away freely. We would go back to Chuntian first.

Posted by Pepper at 9:24 PM No comments: Links to this post