Looking back through the archives, there hasn't been a post about a Japanese place in nearly two years. This is not for lack of eating Japanese food, but for the difficulty in finding Japanese food in Chengdu worth writing about. Tsukushima is the first Japanese restaurant in a long time that I've liked enough to not only go back, but to invite a Japanese friend along. (And did not lose face. Whew!)

They had a board with a couple of 25 yuan lunch specials, written in Chinese and Japanese: 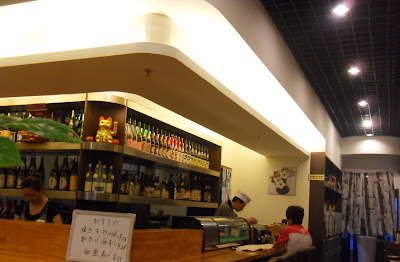 Since it was a sweltering hot day I got an order of salmon sushi. The fish was decently fresh and cool and the rice was good quality and nicely seasoned. Liked it a lot. 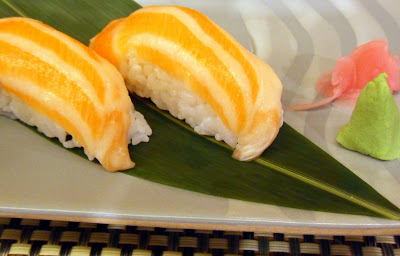 I also got a bowl of buckwheat noodles and tempura. The noodle broth had an authentic flavour but I thought it could have been stronger. The tempura was a good version, though I expected a bit more of it and it got a little too soggy in the soup: 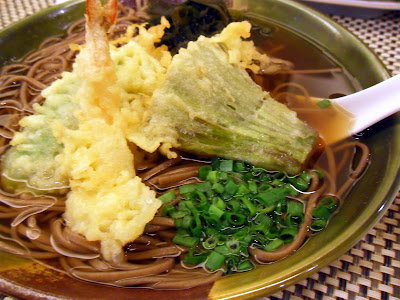 We tried their cold tofu salad, which was nice and smooth and refreshing, especially with the sweet, clean-flavoured Japanese soy sauce on the table. 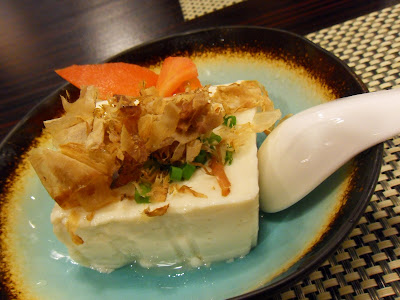 The grilled fish lunch special came with salad, miso soup, rice, fruit, and pickles. The real stars on the platter were the rice and the miso soup. The miso soup was bottomless, which really impressed us. 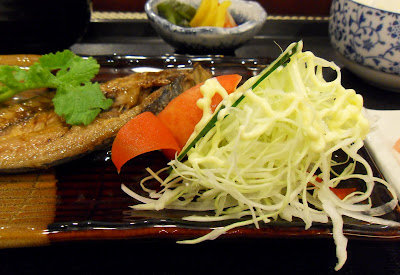 The seasonings on the table, besides the soy sauce, included typical Japanese hot pepper and msg-salt. 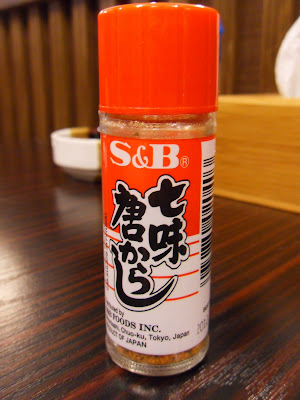 The only thing I would not re-order was this 58 yuan California roll. It was rolled too loose and the seaweed was kind of tough. The large, loose chunks made for clumsy eating. 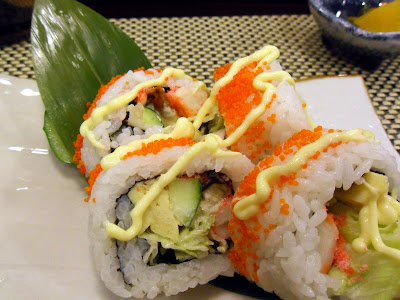 We didn't order anything off their drinks menu but they have a selection of sake and shochu and some Japanese fruit drinks. They also have some Western food on the menu, like steak, sandwiches, and noodles. The menu has pictures of most items but not of the set meals which are a better deal. The English on the menu has been translated from the Chinese names of the dishes so it can be a bit hard to make out, but is kind of fun - udon noodles are 'black winter noodles', etc.

The manager, a Chinese girl who spoke very fluent Japanese, was taking good care of us but the other servers seemed a little green. The ambiance, with Japanese traditional and pop songs playing, was good though we were bothered by the smokers. We would ask for one of their tatami rooms the next time we go. 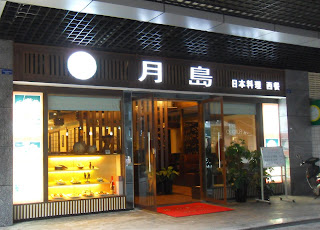 Just outside the High Tech Zone subway stop.
Posted by Pepper at 8:32 PM