In recent years Chengdu residents' eating habits have changed enormously. One factor is that locals now have an unprecedented chance to try foods from all over the world. I have mixed feelings about the resulting inevitable fusion, both in the high end and low end places.

One evening on the Daye Lu side of Women's street, this chuan chuan shop was doing a roaring side business selling sandwiches filled with barbecued chopped meat. We have a similar sandwich in Chengdu, though the meat doesn't get the mix/chop treatment that blends the ingredients while breaking them down into sandwich stuffing. The local sandwich is called guo kui (锅魁). The sandwich with chopped/mixed filling is native to Shaanxi, and known as rou jia mo (肉夹馍). The vertical spit barbecued meat is known as Brazilian barbecue (巴西烤肉). So this concoction is called 'baxi kaorou jia guokui' - 巴西烤肉夹锅魁. 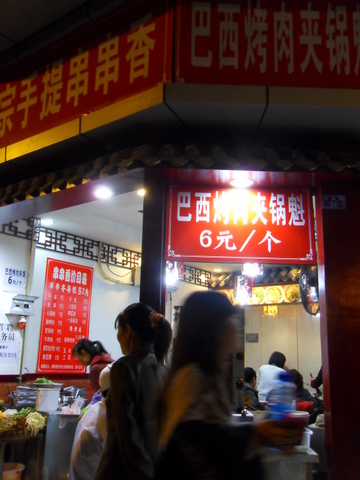 The pumpkin congee they were serving on the side. Not bad. 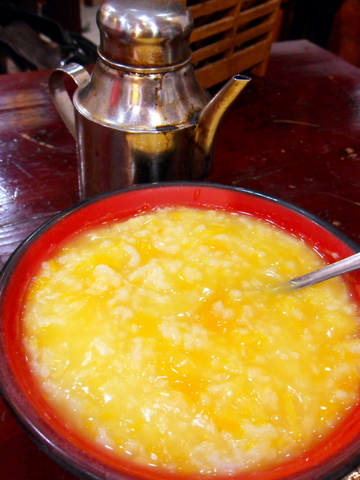 The sandwich wasn't bad. The barbecued meat filling was mixed with a salad-y mix of shredded carrots, red peppers, lettuce, and spicy pepper to taste. 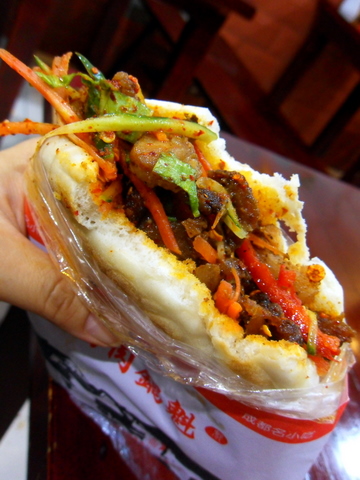 If given the choice, I'd eat a regular guo kui though.

Location: Yanshikou Women's street, lower level on Daye Lu side.
Posted by Pepper at 7:21 AM