For a few months I've been reading with interest the online reviews of Yunmen. The most common reaction seems to be that the restaurant is beautiful inside but the food is a little too out there. Diners express longing for some familiar cuisine or recommend going to a fly restaurant if you want to taste something really good.

The reviews did not prepare me for how uniquely the interior is decorated. The entrance and hallway to the dining room feel like an exaggerated Anna Sui display, with feathered ceilings and a pink and purple colour scheme. It's beautiful, though the too-efficient staff whisk you by so quickly you have little time to take it in. The indoor and outdoor dining areas are a bit more restrained. The natural  light inside is great. 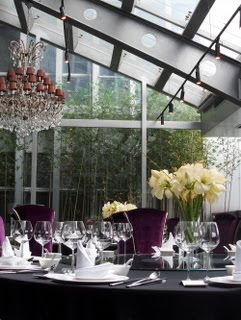 There are three identical black-bound menus. They feature Sichuan cuisine (川菜), Hunan cuisine (湘菜) , Beijing cuisine (京菜), and molecular cuisine （分子菜). I felt a bit out of my depth so brought a Beijing native along, hoping to sample some of each type of food.

We got complimentary bowls of fruit to begin, and then white bowls full of creamy congee. The staff said the congee was made from Gonga Mountain snow water. Whatever its origin, the stuff hit the right comfort food notes for my friend.

The Sichuan dish was an Emei mountain specialty of shredded eels and lettuce in red oil. It was hot, salty, and numbing. The dish of Hunan style bacon arrived right beside it.  We had a good chance to taste the contrast between the ma la of the Sichuan dish and the straight-up heat of the Hunan dish. Then we remembered there were salmon and tofu dishes coming that we wouldn't be able to taste with our mouths on fire, so we set the spicy stuff aside to finish later. 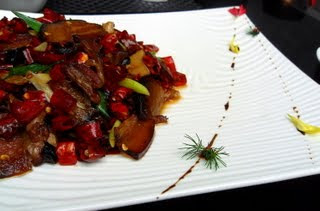 From the Beijing dishes menu, a plate of crispy eggplant (脆皮茄丁）. Sweet like candy, with spicy little rounds of needle peppers as a surprise. Fantastic. 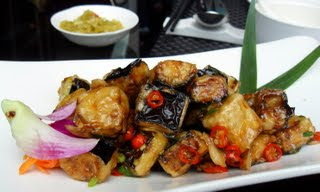 When the server set the sous vide salmon on the table, she announced that this was a molecular cuisine dish, something we would not be able to taste anywhere else in town. The texture of the fish reminded me of jelly or pudding, and it melted in our mouths. The sauce, on the other hand, was full of rough and chewy chunks of meat, making a clever textural reversal between protein and accompaniment.  All the parts of this dish tasted fine though they didn't really work any magic together. 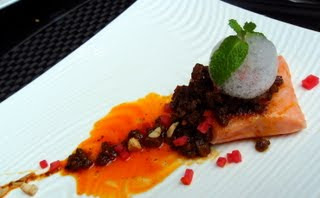 Tofu in mushroom sauce (菌菇私家豆腐）. Fried piece of soft tofu in mushroom gravy with a crispy lotus root slice and chive blossom. I thought this dish was a little bland, but my friend liked it. 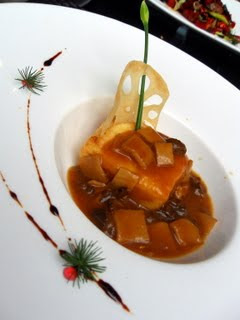 At this point, a party of about six were seated at the table next to ours and began smoking. We asked to be moved to a different area, and the servers accommodated us after taking a few minutes to prepare one of the tables outside.

Fruit wood barbecued ribeye steak  (果木燃烧 肋眼皇).The steak was a decent piece of meat, nicely marbled and cooked medium rare. Whatever the fruit wood treatment involved gave it a similar taste to an ordinary pan sear. The portion was about the size of a man's thumb, and seemed to be plated to make it look as small as possible. 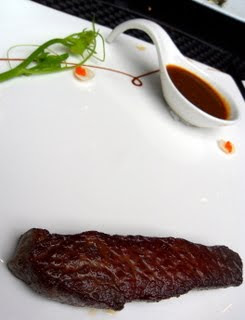 The patio outside was really pleasant. 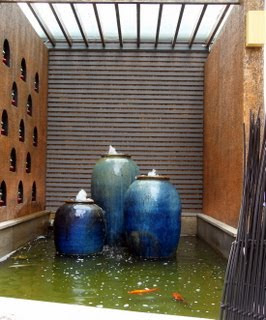 Both of the desserts I'd been looking forward to trying were unavailable. The only dessert that we could order was something called lv da gun (驴打滚). This translates roughly as 'donkey rolling around in the dust', and is made of sticky rice flour rolled around a nugget of peanut paste and tossed in soybean powder.  They tasted fine but again, whoever was decorating plates seemed to be dialing it in that day.

My friend told me the Qing dynasty origin of this sweet as we were enjoying it, which involved a cook trying to invent a dish to tempt troubled royalty. 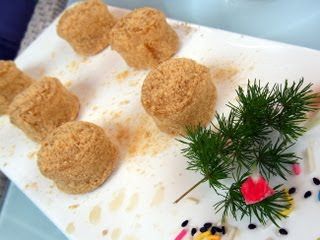 This restaurant would be challenging to enjoy for those who lack Chinese language skills. There is a beautifully photographed picture menu with translations, but the food is so unusual and elaborately plated the pictures may not help much. The men's and women's washrooms are labeled in characters only.  I definitely would have felt lost if my Chinese friend hadn't been along.

Diners laying out five hundred or so per person should expect fantastic food as well as a very perfect and smooth experience. These expectations are not really met at Yunmen, which is better suited for those who don't care how much food costs, or whose goal is to spend more. Though the meal had quite a few underwhelming moments, what I tasted did make me want to go back and try some of the other dishes.