The Minshan Lhasa on Gaoshengqiao Rd is a business hotel that has been opened for a year or two. They have a Western and Chinese buffet advertised for $68 per person. 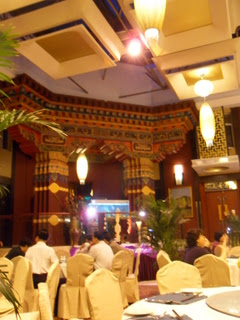 The room is Tibetan themed and full of large round tables, so if you come solo or in a smaller group you are very likely to share a table with other diners. They had a table of cold dishes, a table of bread and desserts, and a row of hot and stewed dishes with two soups, two congees, two kinds of rice, several meat dishes, a green vegetable or two, a mao cai station, a hot dog rack, some barely scared french fries and chicken on skewers. Everything was well labeled in Chinese and English.
There was a more than satisfying selection of Chinese pickled and marinated vegetables. One cold dish, made from dark shredded-looking dried tofu, really stood out for both its taste and appearance. 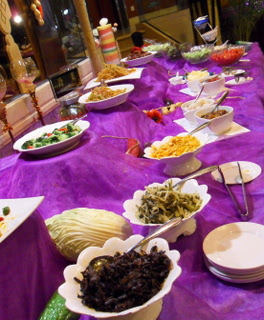 They had the most local selection of dishes I had ever seen on a hotel buffet, with old standards such as twice cooked pork (回锅肉） and spicy chicken (辣子鸡). I was pretty happy to see they served kou kou cui, (trans: mouth mouth crisp?) which I understood to be rabbit stomach but here was pork intestine along with an excellent tofu in a spicy, oily red broth. The fragrant and spicy frog dish was very good. (Frog dishes, (美蛙) are best enjoyed during months when frogs are plentiful in the fields. You can get bullfrog year round, but they are not nearly as good.). There was a fantastic stewed duck and potato dish. Fruit juice and coffee from a Nescafe machine were included.
Dessert table: 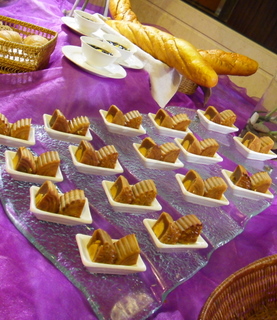 One dessert that I really loved was this warm soup with rice wine, tofu, and watermelon cubes. 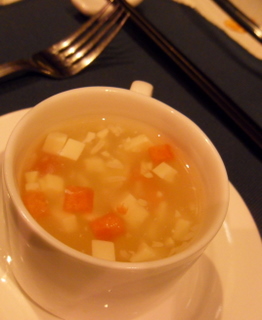 The Western dishes were token and totally skippable. I probably won't rush back - it's easy to go out with friends and find dishes this good or better at half the price in regular neighbourhood restaurants. However, if someone new in town was going for a solo dinner and wanted to try a few different Chinese dishes without having to deal with a language barrier they might do worse.
Minshan Lhasa
一环路南四段肖家河北街88号
The restaurant is just up Gaoshengqiao Rd from the hotel.