My first taste of Rivoli was the 138 yuan evening buffet (includes wine, a bargain) but what caught my eye on the menu was in the breakfast section - eggs benedict for 32 yuan. Went back to check it out recently. 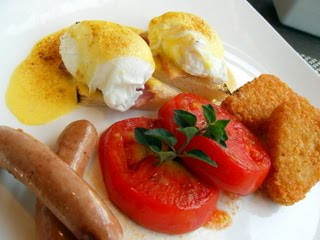 On the plate was a couple of pretty good breakfast sausages, two fried tomato slices with a fresh oregano garnish, and two crispy potato patties. There was no promised English muffin under the eggs (which were nicely poached, though a little cool by the time I got them) but plain white toast triangles.

The hollandaise was delicious, tangy and on the thin side...and bruleed with a blowtorch. I was upset at first to see the precious hollandaise scorched but decided to try it with an open mind. Under the torched part was a thin layer of separated sauce with a thin layer of real sauce underneath. I think torching would work better on thicker hollandaise. (Or, torch it and serve it, stat, rather than contemplating the plate for several minutes.)

My yardstick for coffee served locally has come down to: Better than Nescafe, or not? At Rivoli I first got a cup from the pot on the buffet, which tasted like it had been sitting there since the buffet opened (< Nescafe). I asked for fresher coffee and was served a cup freshly brewed but with very little character(probably an Americano with way, way too much water) and also unfortunately < Nescafe.

The servers were well trained and welcoming but did not have the polish one would expect from a five star place. I waited nearly half an hour for the order (about fifteen minutes for coffee), was interrupted several times about the bill and had to explain to a few different servers that I was not a hotel guest. At one point a cook strolled out of the kitchen, pulled a serviette off of my table, and used it to wipe my plate in the kitchen before it was brought out and served.

There is a fifteen percent service charge, so 32 for the plate and 35 for coffee totalled 77 kuai. I would go back in a heartbeat for the food and maybe drink tea with breakfast, or smuggle in some Nescafe. Unfortunately not smoke free.