The default way to eat street snacks like stinky tofu, sausage, or grilled meat is to dip them in a mix of hot pepper, Sichuan pepper, msg, and salt. Here, the meatballs at IKEA's downstairs hot dog stand get the same treatment. 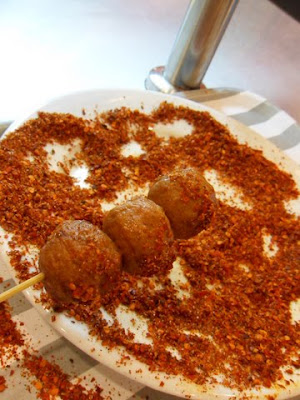 Posted by Pepper at 6:14 AM No comments:

Have noticed a few people selling this moss-covered grainy amber substance on the streets lately. I walked over and asked the vendor what it was.

"Honey, wild honey" she said, pointing out the crystallized body of a bee. Her accent was really strong (Tibetan?) but I made out that it was wild honey from one of the surrounding mountains. 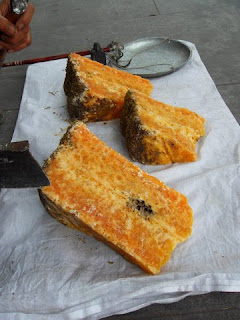 Since our local honey has been in the food safety news lately, and because I was curious and the stuff was cheap (ten yuan per pound), I bought a chunk.

The vendor said to mix it in water or into baijiu, which I never touch, so I am trying to figure out how to use it....maybe adapt a shortbread recipe?
Posted by Pepper at 7:40 AM No comments:

Shang Palace is an upscale Chinese restaurant on the second floor of the Shangri-La Hotel. The Shangri-La also houses Cafe Z, which I visited last year. The hotel is also home to Mooney's, an Irish pub which is a lot of fun in the evenings when their house band is playing and is bound to be one of the main local gathering spots for World Cup games. Shang Palace is not as popular as the other two places, but when I saw they had a dim sum brunch special I had to check it out.

I was expecting buffet style, but you get a check off menu which lists all the items in simplified Chinese and English. There are over 70 choices, from several types of congee to steamed and fried dishes, local snacks like dan dan noodles, and vegetables.

Cha shao bao, the baked style, came as small tender buns filled with a tangy dark red sauce and just a little pork. Good, but would be better with more meat inside the bao. 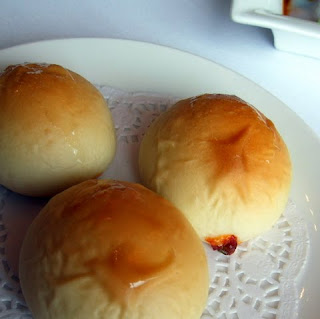 Pork liver rice roll. The liver had that heavy metal thing happening that you always get with the liver of a large animal, and the cilantro in it emphasized the heaviness. It was tender and chewy though. Liked it a lot, but would probably try some of the other kinds of rice rolls next time. 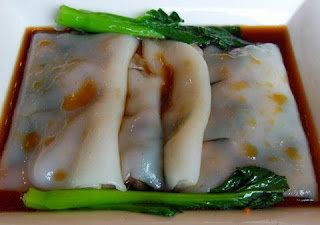 Bok choi heart in superior soup (上汤）. The veg was a little tired looking; I would ask for gai lan or something else next time. There was nothing 'shang' about the 'tang' either, unfortunately. The soup's colour was nice but the flavour was too bland and the texture was like it had been thickened with starch. 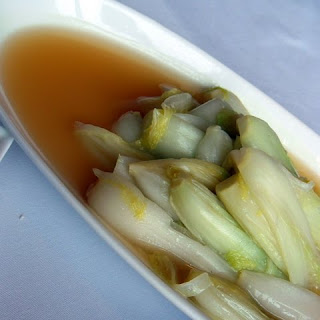 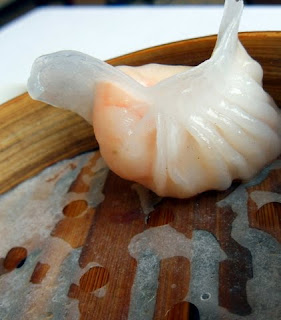 After finishing the main dishes I waited again, for several minutes, for dessert. I actually enjoy a leisurely paced serving style, but the dishes arrived much more slowly than they do at a typical dim sum place and some of the other customers were getting antsy.

Steamed salted egg yolk layer cake with coconut. Fantastic, rich, gorgeous. I am glad I didn't just order the egg yolk buns everyone else was eating. 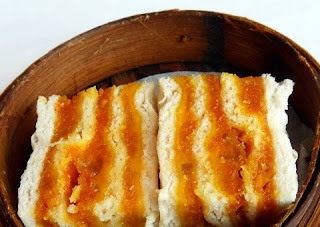 The servers were working hard but were a little disorganized. I was also surprised that many of them lacked English ability. (You can't expect English in Chengdu, even at nicer hotels, but other staff I'd met at this one were always eager and able to converse with customers in English. A server did come up and graciously apologize in English for the delay at one point.)

The restaurant is elegant without being stuffy, comfortable, and best of all non-smoking. Most customers were in business or street casual clothes. 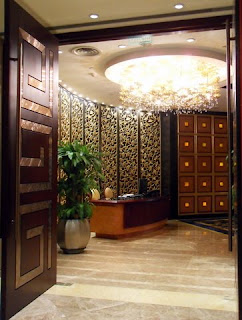 According to their website the dim sum special runs til the end of July: Monday to Friday from 11:30 to 2:00; weekends and holidays from 9:00. The brunch comes to 70 yuan and change per person once you include the service charge, which is decent value. Chrysanthemum tea is included.
Posted by Pepper at 11:58 PM No comments:

There are two locations, that I know of, for Grandma Wang's. One is this one on Yulin South, and the other is in the same complex as the Qingshiqiao da pai dangs. I'd planned to eat at a Hong Kong restaurant the other evening but the weather was so humid and hot I felt like eating something numbing and spicy (ma la), which is supposed to help the body deal with heat and dampness.

Beef buckwheat noodles (牛肉荞面）, made fresh from the press and cooked only for a few seconds. 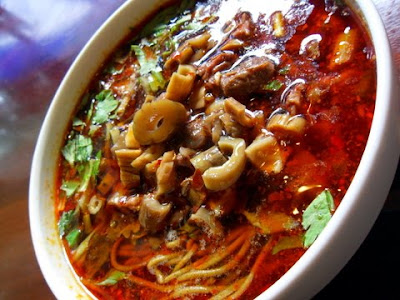 I also got a bacon rice dumpling (zhongzi). It had mostly red bean and a few tiny pieces of bacon, but for two yuan it was fine. 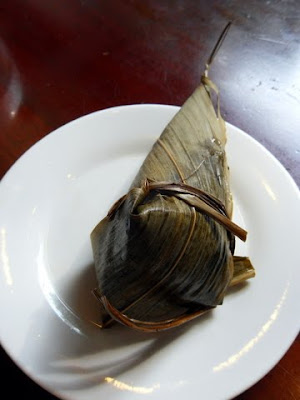 Their vegetable was boiled lettuce. 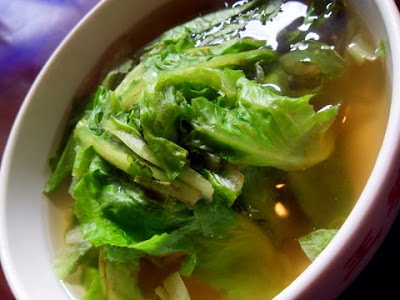 While I was eating a woman came up and bought bags of ye'er ba, smooth yellowish sticky rice dumplings filled with ground pork and ya cai, a kind of preserved vegetable.

Five Signs You Should Not Eat Here

As anyone familiar with the food scene on the mainland knows, it's much easier to find satisfying downscale eating experiences than upscale. I am always on the lookout for higer end restaurants that I can recommend to people, but far too often these places are more style than substance, even the big names, and the food isn't good. Before eating at a higher end restaurant I usually stop in, ask to look at the menu, and chat with the servers to get an idea of what customers would experience. A few signs that warn me to eat elsewhere:

Every price on the menu ends with multiple 8s. The point is to impress your guests with the amount of money you are spending. The food is irrelevant.

Crass ostentation, culinary style. Shark’s fin, abalone, bird’s nest, or other luxury ingredient in some pointlessly expensive preparation. Orchids perched on every plate, or in your glass of juice.

A huge, heavy menu. The size and weight of some menus in upscale restaurants is seriously ridiculous. It’s getting difficult to stand upright while holding them. One menu I looked at the other day had a heavy elaborate metal cover that made me fear for the tabletops.

Overdecoration in grand period Chinese or fusty Western style. Some places have not only cloth chair covers and layers of tablecloths, but add place mats on top of the tablecloths. With water shortages in other parts of the country, the thought of the laundry alone makes me ill.

A restaurant is a business after all, and it's an unfortunate fact that a very successful restaurant here does not have to serve good food. It remains to be seen whether all the forces driving down the quality of the food served in China can be countered. I hold out hope that as standards of living rise ordinary people will eat out more frequently and will demand higher quality experiences from the upscale places as well as their neighborhood restaurants.
Posted by Pepper at 5:57 AM 1 comment: