See Food and Eat It

Last weekend I went with some friends for a late night dinner at the da pai dangs* across from the Qingshiqiao seafood market. The plan of action was to arrive late, when the fresh seafood comes in off of the planes, buy items from the market and take them across the street to be cooked. Crates of sea creatures were being unloaded when we arrived. 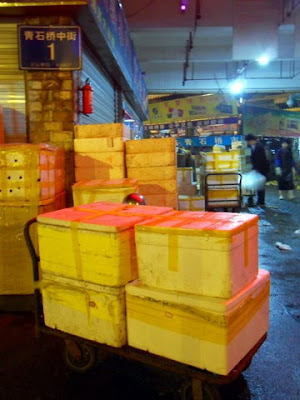 We ended up buying scallops from the market. (We tried to haggle for salmon which the proprietor said was from Iceland. We were dubious.) We then went across the street to one of the smaller establishments. The vendor had a bewildering variety of seafood available including abalone, a few kinds of shrimp, crabs, and clams. The shrimp were jumping out of their tray. 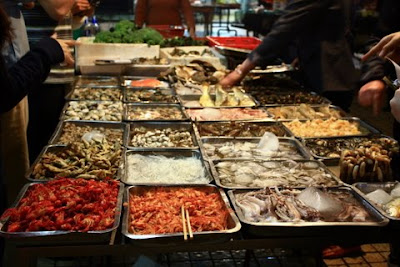 We ordered shrimp done up spicy as well as not spicy, oysters and scallops on the grill, and stir fried squid. 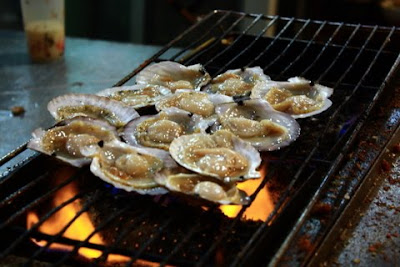 Empty food trays and shells piled up beside our bowls as we laid waste to everything. Beer, broccoli, mao dou, and egg fried rice rounded out the order. Since the group included expert seafood choosers and people who could haggle in Sichuanese, we ended up paying only about 30 rmb per head. You can end up paying much more especially if you order the more expensive items. 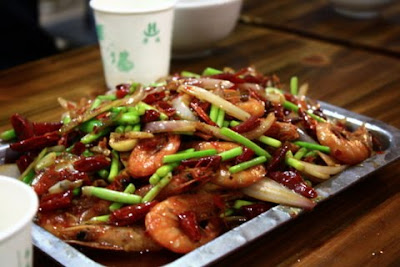 At about one am, as we were finishing, the chengguan who had been watching the street left. (Chengguan are thug cops who keep the city presentable by throwing shopkeepers' wares off the sidewalks and harassing the three wheeled cab drivers.) The block was then transformed, as tables were brought out to the street and began to fill with customers seeking sustenance after a night out singing or clubbing. We concluded that we had come about two hours too early. 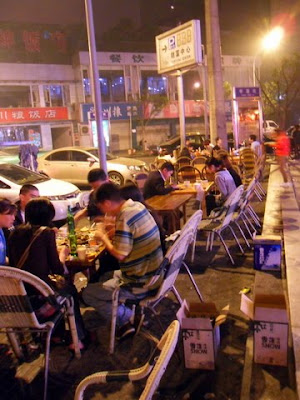 The next day when we ran into some of the same friends, we all greeted each other with, 'stomach ok'? Most of us were.

*A da pai dang is a modest restaurant set up on the street. They are mostly associated with Guangdong and its neighbour Hong Kong, and tend to have a seafood theme though this is not strictly necessary. Xiamen seems to have scads of them.