The soup had lots of red pepper floating on top, Sichuan pepper, cinnamon, and other spices floating in it. The cooked vegetables already had a red tinge. The server mixing up the cooked ingredients with seasonings was worried though.

"It's not going to have any flavour!"

The problem was that I requested no msg or chicken flavouring be added to the bowl. I also asked for hot pepper but less red oil on top.

"I don't know if it has any flavour", she said as she set the bowl down.

And while I was eating the mao cai, which was hot enough to give me the sniffles,

"Any flavour in there?" 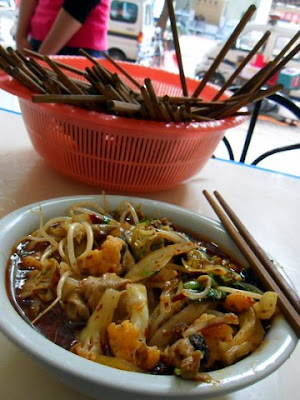