When I first arrived in Chengdu it was really strange to order spinach out of season, but now we can eat it all year. Amaranth remains a vegetable with seasonal availability,and is just starting to pop up on menus. The red and green leaves have a flavor similar to spinach but pack in far more nutrition, from what I've read. Because it stains everything it touches red, usually it's eaten simply stir fried rather than put in soups or combinations of other ingredients.

In Mandarin it's called 苋菜, xian cai, but locally I've never heard it called anything other than han cai.

Lunch earlier this week, an order of amaranth with dou tang fan. Delicious. 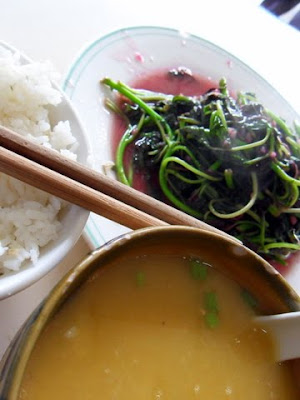