This noodle and homestyle restaurant's main draw is its very convenient location by the Moziqiao overpass, where Computer City meets Kehua North Road. I've always liked the food here, but it used to be one of the grubbiest restaurants I've ever eaten in. A while ago they did renos, and now it looks quite nice inside: 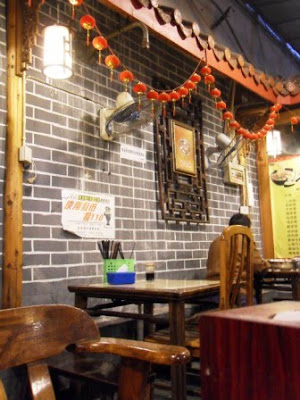 However, I think the place still qualifies as a fly restaurant (苍蝇馆子), since the walls are not attached to anything on top. The ceiling is made of a few tarps whose translucence shows clearly how dusty they are. I probably wouldn't try to eat here if it was raining.

The other day I went in and asked for an order of beef and green peppers (青椒牛肉丝), even though it was not on the menu. They charged me 19 yuan for it, and I had to pay up front. (Thinking, this better be max delicious.)

Beef (or pork) strips with green peppers sounds like one of the least interesting dishes in the world, and I was always puzzled when my local friends frequently ordered it or declared it their favourite dish. When I realized that Sichuanese cooks often prepare the dish with spicy bean paste (豆瓣酱), I understood.

This version also had black beans (豆豉). It was a great combination. 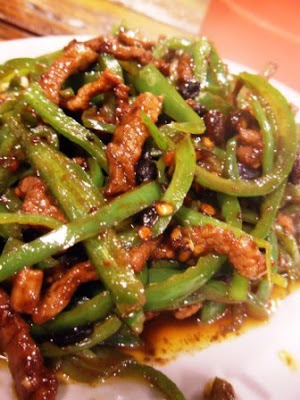 They also serve hot rice now, which is an improvement. (Before it was scooped out of one of those big pails which gets cooler and cooler as the day wears on.) There were a few other customers, and everyone else was eating a fresh fried guo kui and then getting a bowl of noodles.

Qingdao and Snow beer both start at 5 yuan per bottle. 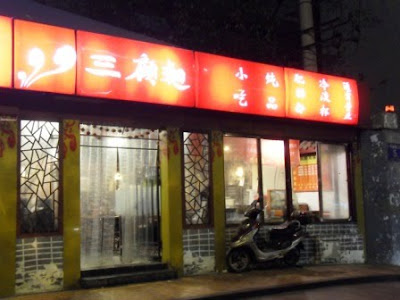 Address:武侯区一环路南二段15号
Posted by Pepper at 7:11 AM