Liu Bei, warrior and statesman, founder and first Emperor of the Kingdom of Shu. (Shu is an ancient name for present day Sichuan.) His tomb is in Chengdu, near Wuhou Temple. 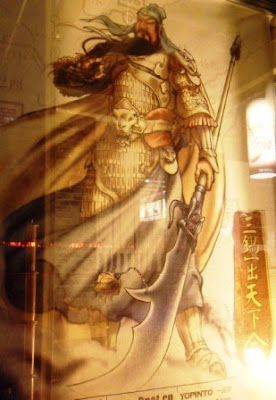 Liu Bei is also the hero of the great historical novel Romance of the Three Kingdoms. (三国演义)

'Three Kingdoms' sounds almost exactly like 'Three Pots'. And so, the period decor of Triple Pot, a northwestern branch of a local hot pot chain: 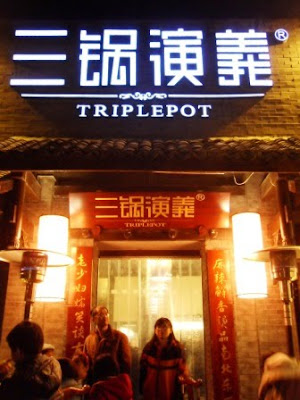 Their specialty is the triple sectioned hot pot (三合锅). Half of the pot is spicy red soup, one quarter is a thin congee style soup, and one is mushroom. The rice and mushroom soup were both very slurpable though didn't do that much for the ingredients that were cooked inside. (Their website recommends cooking dumplings in the mild soups and a raw egg mixed with greens in the congee, which we didn't try.) The spicy soup had lots of seasoning, including a strong taste of cumin. It's very suited to a meat-heavy order: 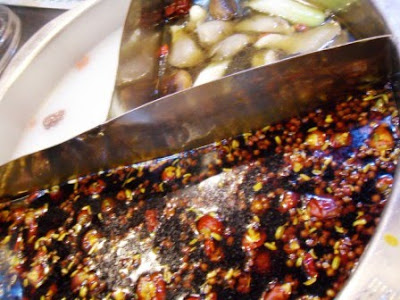 Most of the hot pot ingredients were standard. The pork meatballs (肉丸) were very good. I really loved the shrimp paste (虾滑), the grey blob in the upper right hand corner of the picture below. We scraped it into each of the pots and it was like a shrimp dumpling without the wrapper. The lamb skewers (羊肉串）, which came frozen, were pretty tough but the thinly sliced fatty lamb (肥羊) was great in the spicy soup. 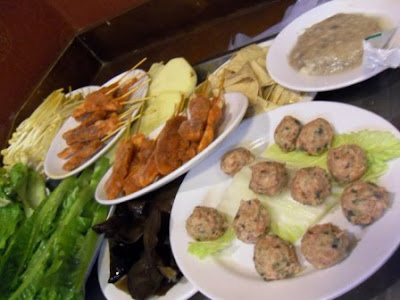 Their flatbread (飞饼） was very good. We got an order of pumpkin fritters (南瓜饼), which had peanuts and sesame inside, but they had been cooked (or maybe reheated) in way-not-hot oil and were greasy. Service was fine, though it was a busy night and the staff seemed a bit run off their feet. The cleaning staff in particular was having a hard time keeping up.