Losing Your Soul to Noodles

"During the Qing Dynasty there was a salt dealer in the city of Zigong named Hu. One day he bought several pounds of pork but carelessly dropped them into the mound of salt. He searched for the meat but couldn't find it. Later, a customer came to buy salt and they discovered the meat in the salt pile. Dealer Hu felt it would be a shame to waste the meat, so he chopped the meat into tiny pieces and mixed them into a large pot of noodles. The fragrance drew all the neighbors around to enjoy the new delicacy. Later Dealer Hu's business fell on hard times, the salt market closed, and he passed away.

However, Dealer Hu's son had learned the art of making soul hook noodles (勾魂面) and opened a shop styled 'Hu Style Soul Hook Noodles'. The taste was unique and the texture was wonderful. Business was so good that it continues until today. However, the Hu family technique is not shared with outsiders, so people outside Sichuan have little chance to taste this delicacy." (roughly translated from the Baidu encyclopedia)

Soul hook noodle shops are found all over Chengdu, and a few are called 'Hu Style Soul Hook Noodles'. I finally tried them the other day. The last thing I expected to see on top was rou song - pork floss. 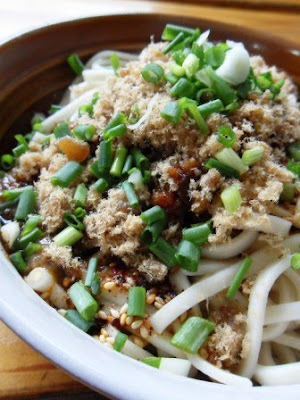 However, once mixed up you couldn't really tell there was rou song. 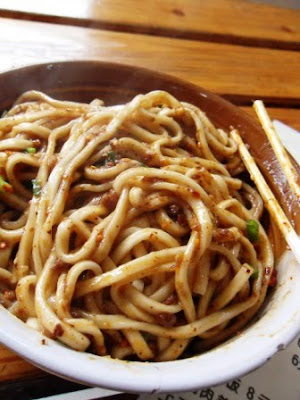 These noodles were a little bland and soft, actually. I prefer ran mian, sujiao, zajiang, or any of the dozen other kinds of dry mixed noodles that can be enjoyed. However, I hope that I will taste a bowl of soul hook noodles worthy of the story some day.
Posted by Pepper at 7:14 AM