Chengdu is peppered with mountain treasure (山珍) restaurants, which specialize in mushrooms, fungus, and medicinal foods. I wanted to visit one before the mushroom season was over and found my way to the mushroom restaurant in Beilian Tianfu with a couple of friends on the weekend.

The server who took our order didn't give much guidance about the menu, but talked me into ordering a box of corn juice to share, which tasted just like the liquid in a can of corn. Then a new, very pleasant and attentive server took over and cared for us very well, explaining how to cook and eat the mushrooms.

The rather intimidating main attraction - their most basic mix of mushrooms. The only ones I recognized were the chicken leg mushrooms, bamboo fungus, the pig stomach mushrooms, and the beef liver mushrooms. I asked our server to introduce the others but most of the explanations were beyond my Chinese. 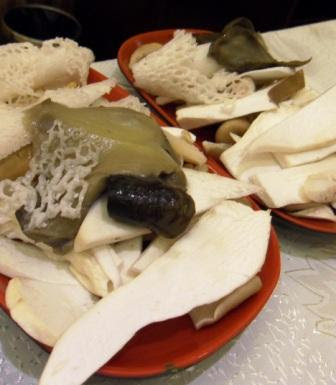 Individual pots of soup (you can also order a large bowl). Rich and complex without being the least bit greasy. I tried to ask what was in the soup, but beyond 'secret recipe' not much of the explanation registered. Once the soup was boiling, the mushrooms were added and cooked for several minutes. 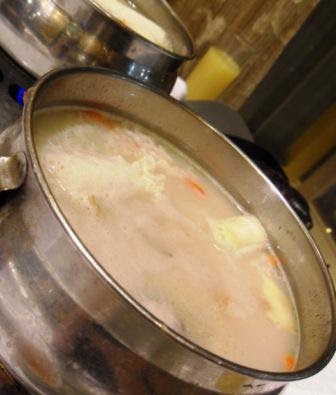 A rich dish of liang fen (cubes of yellow bean starch) with pork belly, recommended by the server. It wasn't bad, but everything else was so good we left most of it. 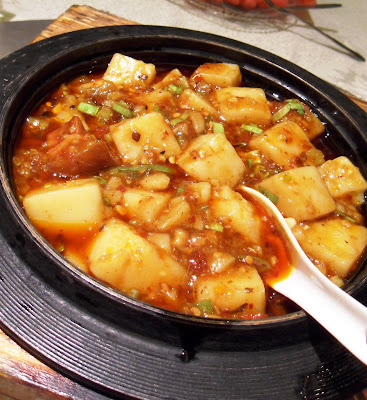 Baby bok choi in a chicken sauce with goji berries. 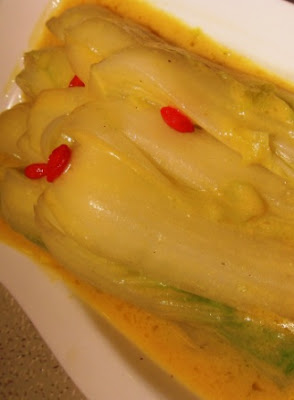 This type of hot pot is much lighter than traditional kinds, with no oily broth or dipping sauce, but felt ten times as nourishing. The varied textures and flavours of the mushrooms were so interesting I could have kept eating them all night. The really remarkable thing was how good the food made us feel. We didn't finish eating until late, but I felt energized enough to walk all the way home.

Fourth floor of Beilian Tianfu Shopping Mall, just south of the second ring on Kehua Middle Road.
Posted by Pepper at 7:11 AM