The western part of Chengdu has a new option for people who want a western style toilet available where they eat - our third Peter's Tex-Mex. This one is on the second floor of a huge shopping complex anchored by a newly opened Ren Ren Le, opposite the south gate of SWUFE. It is smaller and more intimate than the other two Peter's, and the service feels much better here than at the Peter's on Kehua North Road. They have the same great half-off dessert deal after eight p.m. As we left, around nine thirty, quite a few people were coming in for dessert and coffee. 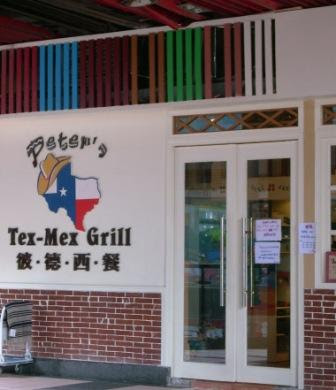 The food at Peter's is usually decent, though they definitely have off days and portions can seem tiny to those used to American-style servings. The best sections of the menu are the Tex-Mex dinners, appetizers, and sandwiches.(Always pay the extra for waffle fries.) The entree section, where you get a main with a choice of three sides, is both higher priced and lower quality than the previous and very skippable. (Y65 for meatloaf? Pass, thanks.) They serve breakfast all day. Desserts are on par with a good diner and taste just, well, real. Foreign friends who live in smaller cities beg to eat here when they visit Chengdu, not because it is so delicious but because it is so not Chinese.

Location: 彼得西餐 光华村南街 50号 新光华广场二楼 Few minutes' walk outside the west second ring on the next street north of Carrefour.
Posted by Pepper at 8:19 AM