South of the second ring near the Great World Carrefour there are a few blocks where there seem to be more Cantonese than Sichuanese restaurants. There is higher end Cantonese, dim sum and a few of the Hong Kong style cafes (or cha can ting, 茶餐厅) that serve diner style English/Cantonese fusion. However, this far from Hong Kong the formula goes a little off and a 'cha can ting' is just as likely to be an upscale Cantonese or seafood restaurant, or a high end teahouse that serves non-local snacks.

Hollywood Hong Kong Style Cafe is the first cha can ting in Chengdu I've tried that I've liked enough to want to go back. The sit down menu is in English and traditional Chinese characters, but their takeout menu is in simplified Chinese. They have a long list of drinks (including Hong Kong iced tea and coffee), sandwiches (including toast and French toast), roast goose, cha siu, congee for Y10 a bowl, a huge selection of stuff over rice dishes, a few kinds of Japanese ramen, and Thai curries over rice. Iced coffee and a bowl of wonton noodles: 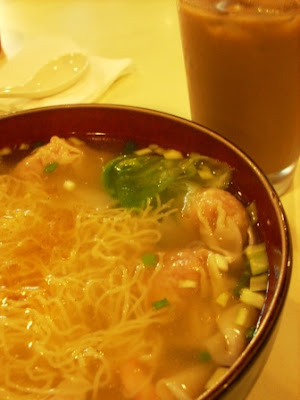 The coffee was a treat, just the right sweetness, and the wonton noodles were very good though not quite the standard you'd expect in Hong Kong. I saw a couple plates of fluffy shrimp scrambled eggs (滑蛋虾仁) float by and a few orders of beef hor fun (牛肉何粉), both things I want to try when I return. I also really want to go back for their breakfast.