Edit: This place has changed beyond recognition. It now does barbecue at night.

This restaurant used to be called The Little Kitchen and serve great homestyle food. Recently there have been several annoying changes: new, silly name; plastic grape vines all over the ceiling; new menu with Chinglish on the cover and some of my favourite items removed or changed; and higher prices on their specialty dishes. It still packs in the locals though, so I decided to put my grudge aside and eat lunch there today.

It was hot so I ordered one of Chengdu's favourite cold dishes, usually translated 'garlic white meat' (蒜泥白肉), Y12. 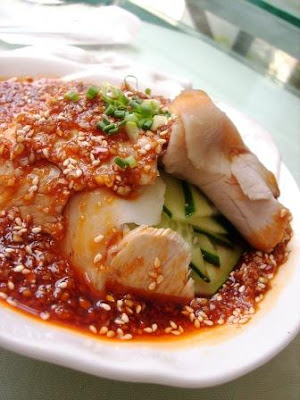 Often the pork slices are just tossed in pureed garlic and spicy red oil, but this was built with care. There was a pile of sliced cucumbers on the bottom, then a layer of very fresh and tender thinly sliced pork, and finally minced garlic with red oil and sesame seeds poured over the top. The raw garlic was minced fine but not pureed, and so was not overpowering. Fantastic, though could have been hotter. 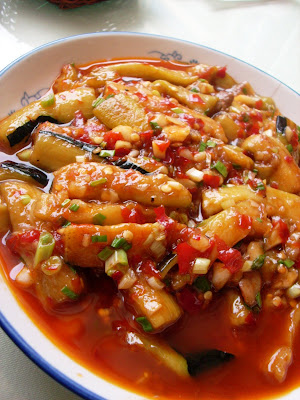 This eggplant broke my heart; even after the new menu they still used to have my favourite yu xiang anywhere, dark and intense. This is a B- version of the more common red and sour style of yu xiang. Hope it's not a permanent change.

It was too hot to even think about ordering my other favourite dish there, Jinsha corn (金沙玉米）. Jinsha is the name of a place but the literal meaning is golden sand. Jinsha corn is battered and deep fried corn kernels, looking like a little pile of gold on the plate. Also good is their bear paw tofu (熊掌豆腐) and hobo twice cooked pork (丐帮回锅肉).

In the evenings they bring out huge trays of cold dishes, mostly meat and other animal parts, and tables of people having leng dan bei (冷淡杯, cold dishes and drinks） cover the sidewalk. Like most businesses on this street, the place is under renos but this is the sign out front: 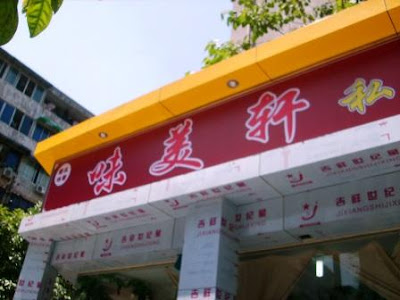