Lately I've had an itch in my teeth to bite into a good shrimp dumpling. Today, feeling flush from payday, I decided to look for a Cantonese dim sum place for lunch and entered the search term 'shrimp dumpling' into our local Dianping. Grand Bay Seafood popped up.

When I got there, I asked about dim sum (点心) and the server turned to one page near the back of the menu with just a few items listed. Shrimp dumplings were Y58 a serving, and there were only six in the picture. I was a little disappointed in the lack of choice and high prices, but asked for the dumplings (虾饺) and an order of seasonal vegetables braised in superior soup, Y26. The server said, 'You just want a half order of dumplings, right?' and I agreed. She was quick to bring me a new plate when I pointed out the first one wasn't clean. 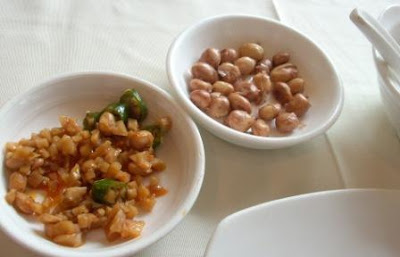 Besides the lack of dim sum, I was very impressed with the menu. You can get a Nanjing style roast duck (with pancakes, sauce, and vegetable) for just over Y100, very reasonable for this style of restaurant, and there is one interesting page of medicinal tonics. They also have a selection of Sichuanese classics like ma po tofu. The menu is not only translated into English but translated well, doing a decent job of describing food that is foreign to most Westerners. 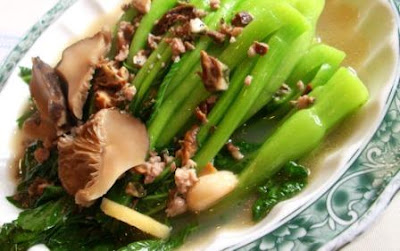 Superior soup (上汤) is broth that has been further enhanced by simmering meat and aromatics in it. This 'superior soup' didn't have the clarity that one associates with high end soup, but the flavour was very satisfying, and it was appealingly served with some of the soup components - mushrooms, small bits of pork and seafood, and whole, tender cloves of garlic. The vegetable was gai lan. 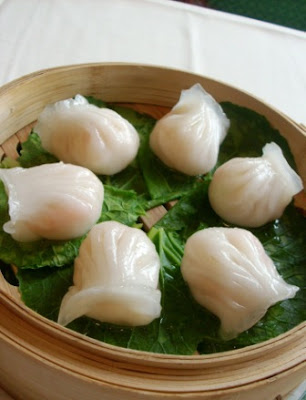 It turns out that six dumplings is a half order. Whole shrimp, loosely bound, with just enough tiny diced celery for crunch. Both celery and shrimp were cooked to the correct level. The wrappers could have been thinner, but these dumplings were pretty perfect otherwise. I ate a couple of them with the pao cai but they were really good as is. Despite the price, very good value.

The servers were quick and efficient, though seemed a little foreigner-shy. They mostly left me alone while looking at the menu and after I got my order.

Gratis plate of fruit to finish: 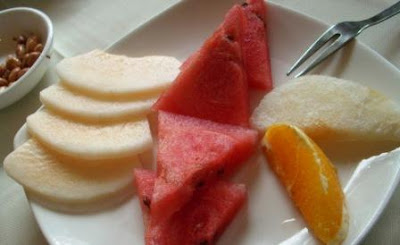 Address: 大海湾酒楼 成都市人民南路三段29号附1号 On the third south section of Renmin South Road, the section in between the river and Computer City.
Posted by Pepper at 4:12 AM