Huanglongxi is a town about an hour's bus ride outside Chengdu. I'd wanted to visit for a long time, so hopped on the bus from Xinnanmen station yesterday (Y7). The town's main claim to fame is well preserved Qing dynasty buildings; one section of town is in permanent use by television stations and filmmakers. 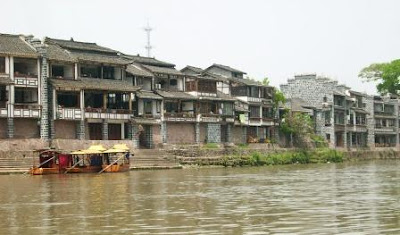 Very close to the bus station is a market street. I saw, for the first time in China, the musky little brown fruits that they call 'chikoo' in India - anyone know the English name? One snack many vendors sold were these crispy fried cakes made from peas (豌豆饼) and peanuts. You can get them in Chengdu too but these are a slightly different style, with a much lighter batter. Tasted OK. 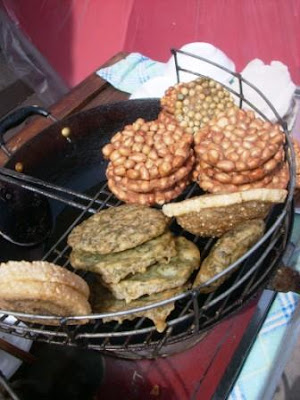 There must be lots of mulberries (桑果) growing in the area, because vendors were selling them for only two yuan/pound. The local specialty food that every tourist shop seemed to be selling was salty preserved beans (豆豉) wrapped in bamboo leaves . They were only 5 jiao per packet so I picked one up for experimenting. 'Dousi' packets: 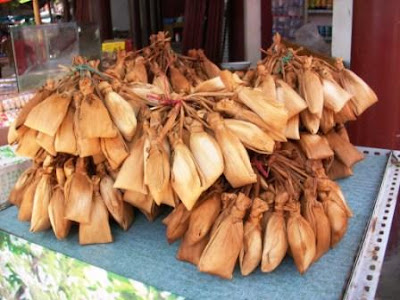 Other featured local products included two kinds of sesame candy: zhimagao 芝麻糕 - sesame that had been sweetened, ground to powder, and pressed into layers; and 'leather candy' 牛皮糖 - flat gummy strips with white and black sesame pressed into it. I asked if the 'leather' was real skin, which got me a 'silly foreigner' look. But I have been surprised before.

Scenes of rural life passed on my way to the Chen Family Water Mill. The driver of my three wheel cab (三抡车) was local so I quizzed her about the local crops. I grew up on a farm but am embarrassingly unable to identify crops from the road in China; thought the vines of green beans (四季豆) were grapes (葡萄). The land usage was pretty efficient; the rape (油菜） was almost mature and when it is harvested it is replaced by another crop. Grain drying: 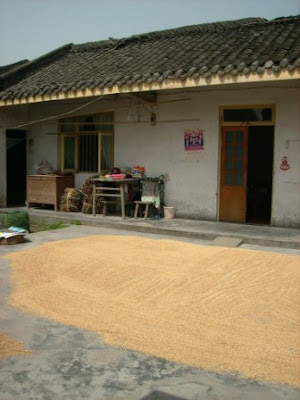 The rural areas of Sichuan have thousands of guest farms, or nongjiale (农家乐) - places to eat, sleep, and relax. They are especially concentrated around tourist towns like Huanglongxi. The food at these places is usually country style and advertised as organic. The Chen Family Water Mill had several 'shengtaiyuan' (生态园, ecological?) nongjiale within walking distance. I looked at a menu at one place my driver brought me out of curiosity, though I wasn't ready for lunch at that point. They had lots of 点杀 dishes, where you could order a live chicken, rabbit, or duck to be slaughtered and prepared on the spot.

A couple of hours later, at the end of the Y5 boat ride to Dafo Temple (大佛寺) I walked up the steps and saw a tea house/restaurant called Hongyuan Inn (红源酒店) where quite a few people were eating, and which had a great smell coming from the kitchen. Good signs both, so I sat down and asked for a recommendation, which was some kind of wild fish at the top of their specials page. This turned out to be small bony catfish in one of the zillion kinds of hot and numbing (麻辣) oily red broth. Little fish I always find confusing to eat - I never know what parts are edible, and ended up crunching the heads whole while picking the rest of the meat off the bones. The effort didn't really pay off in deliciousness though. I also got a plate of water spinach (空心菜）, which was amazing. They had wild mountain vegetables to try as well but at that point I didn't feel very adventurous. Lunch was thus mostly an expensive strike out, but I would eat there again, just order differently. Fish: 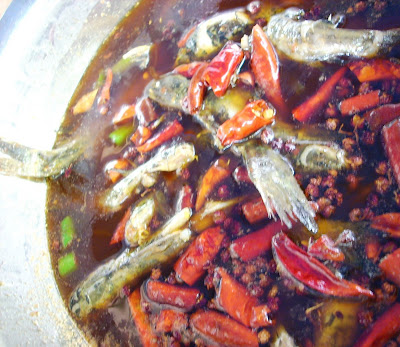 The tea house crowd was mainly older local people, many either on their way to the temple or coming back from it. While I was waiting for the food a few sat down at the same table to drink tea and chat. I've been in China long enough that this didn't bother me, but as a new arrival I might have been put off by the spitting past my elbow or by the little bottom peeking through the split pants (开裆裤) worn by the baby. I half listened to the conversations and chatted with a grandmother a bit about the 8 month old, whose parents were working in Shenzhen. Back in town: 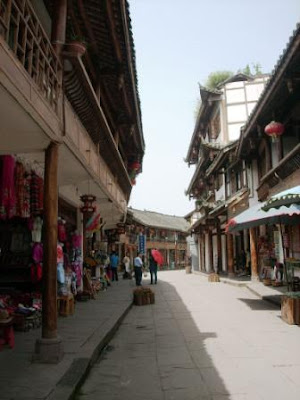 Huanglongxi is the kind of town that overflows during holidays like the coming May Labour Day. In addition to all the nongjiale there were many guest houses on the old streets advertising accommodation (住宿); may stay overnight next visit.
Posted by Pepper at 8:07 AM