Near Gaoshengqiao is the Roman Leisure Area, a curious collection of European style buildings all joined with walkways. Out front is a replica of the Obelisk at the Place de la Concorde, a la Paris. The alleys in between the buildings are labelled in traditional Chinese Characters: Rome Street One, Rome Street Two, up to Rome Street Six. The shops and walkways are full of antique and jade jewellery and art sellers, but there are all kinds of small stores here - DVD vendors, travel agencies, massage places. The bottom level especially has several empty shops but many vendors set up outside and there are a few areas that appear very tough to keep clean. 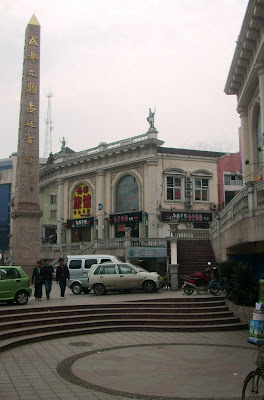 One of the more dark and greasy alleys (#6, bottom level) has two Korean restaurants opposite each other. I visited one called Hancheng Xuan, or Seoul Pavilion. The interior really takes you away from the street - the place has one of those platforms where you remove your footwear first and then sit on the floor. They also have normal tables. I came in during the afternoon, and there were a couple of other tables occupied with ladies lunching. 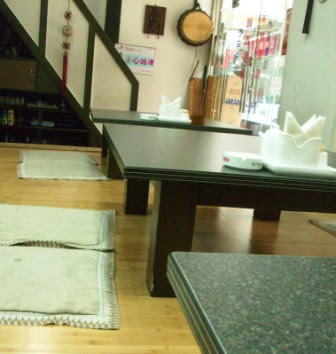 Plastic bowls, metal chopsticks, and pan chan, counter clockwise from bottom centre: radish kimchi, cabbage kimchi, sauteed hot green peppers with dried anchovies, sesame bean sprouts, and sweet and spicy pickled cucumbers. The one on the bottom right I could not identify - white, chewy strips in red pepper. The server later cleared things up - pig skin. The pan chan were all house made, and tasted fine, but lacked real crunch and brightness. 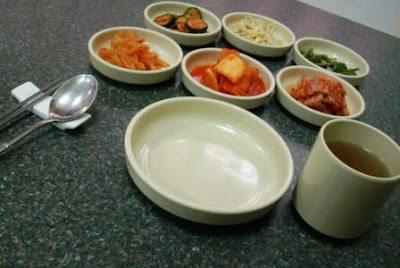 My default initial order in a new Korean place is dol sot bibimbap. This version was pretty good: rice with a good crust on it from the pot, spinach, radish, carrot, sprouts, chopped beef, lots of kochujang (Korean sweet red pepper paste), the egg on top. 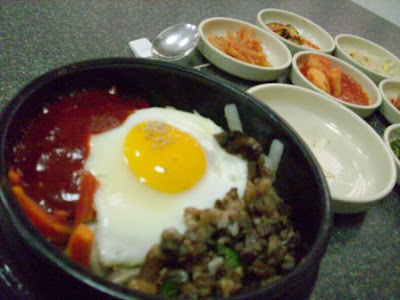 I did find the menu confusing since I can't read Korean and had to translate what I wanted mentally into Chinese. The server wasn't much help and, typically, couldn't understand any Korean names of dishes. I ordered what I thought were some grilled vegetables, and she came back and said that order didn't make sense and suggested another type of grilled vegetable. I agreed, and this came: lettuce, rice cake, lotus root, potato, red pepper, all doused in a sauce with a heavy shot of kochujang. I believe it was cooked on top of an iron plate. Not pretty, but absolutely delicious and worth coming back for. 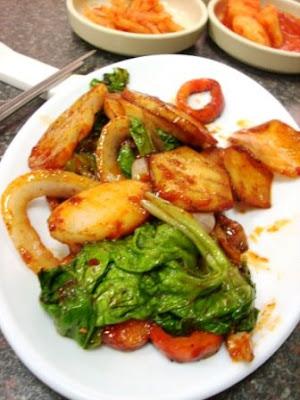 When the bill came I was charged only Y15 for the bibimbap; the side of vegetables was free. With pan chan and barley tea included, this place is tops in the value for money column. (Other menu items are in the Y20+ range) Because of the ok-but-lackluster pan chan I figure it would not be a barbecue destination, but would definitely drop in for a bowl of noodles or tofu stew if I was in the area again.
Posted by Pepper at 6:52 AM