Had a Sichuanese place all picked out to try today, but when I got there the staff was all outside playing majiang. They would have served me, but interrupting a majiang game is not the path taken to stellar meals in Chengdu so I ended up halfway down the block in, you guessed it, a Korean place - 大长今 (Da Chang Jin). The boss is from Korea and welcomed all customers warmly. He also spent quite a few minutes chatting with me about Korea and asking me about my business in China. His wife later came out and introduced herself as well. It was a real relief to order in Korean and be understood, and I was very excited that the menu had jajangmyun (noodles with 'fried sauce' full of cubes of meat, and vegetables). I also looked for miyokuk (Korean seaweed soup, or 海带汤 in Chinese) on the menu and they offered to make me some. I received, gratis, a little bowl with less than a cup of very garlicky Korean seaweed soup, which was a bit too fresh but a pleasure.

The service was so hospitable I wish the food had been better. When the boss found out I had visited Korea he said that the jajangmyun would not taste the same. It was pretty bland, and the kimchi was sour and too salty. They have homestyle cooking like kimchi chigae and soon dubu and snacks like dok bokki and kim bap, but they are also located on a whole street full of restaurants to be explored; probably will not be returning soon. 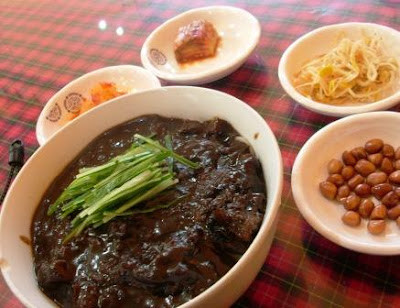 Address: 光华大道西街西南财经大学南二门外
Posted by Pepper at 9:59 AM