Most Western food in Chengdu is pretty expensive and pretty bad. ('Western' food from a Chinese perspective means North/South American, European and Middle Eastern places.) Sometimes, though, an expat just wants to sit in a nicely appointed room, order in English, and eat with a fork. Most of the Western places have free wireless too, a major draw for me today since my apartment had no power. I almost never go out for Italian but found myself on Kehua North Road wanting anything but Peter's, so decided to check out Casa Mia a couple of doors down. The menu has pictures and English but my server didn't speak English and didn't know much about the menu in any language.

Caesar salad. Still looking for the Caesar salad in town that I would reorder, but this one came the closest with real cheese and croutons that tasted homemade, if not that day. Dressing had little Ceasar flavour, but had the off texture of dressings that are thickened with some kind of plant starch. And it feels funny to gripe about the authenticity of something that was invented in Mexico, and is considered 'Italian food' in North America, but...tomatoes on a Caesar salad are just wrong. 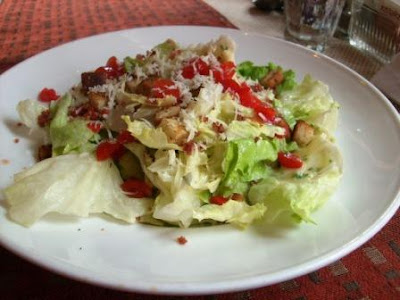 Chicken sandwich: grilled chicken breast, salad dressing (too sweet to be real mayo), lettuce, tomato, cheese, on toast with side of freezer style fries. Sandwich was fine; adequate-fine, not good-fine. The cheese didn't really register; I was into the second half of the sandwich before I realized it had cheese. 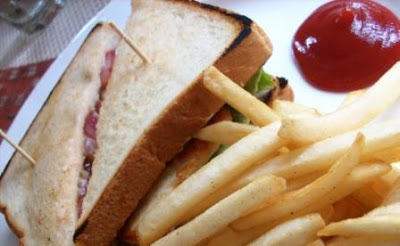 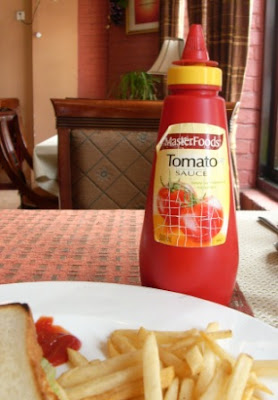 The server kind of forgot about me but I managed to order a very bitter espresso to finish. Casa Mia has a huge menu and there is likely better tasting stuff on it somewhere, but today didn't inspire me to return and hunt for it. The interior is nicely decorated as well, but...there were a couple of very casually dressed young guys hanging around, perhaps off duty staff or their friends. One of them lit up, making me wish I had chosen to eat at one of the casual Chinese places that are open to the street instead. Next time I am on Kehua North road and needing lunch, I probably will.